Image from Shelter Bus on LinkedIn

They say charity starts at home. In the case of the founders of the Shelter Bus Project, the sentiment could not ring truer. Originally the brainchild of Naeem Farooqi who is a Principal Consultant at WSP in Toronto, the Shelter Bus project is now run in partnership with Humanity First. It is driven by a team of volunteers and an advisory board which includes Tracy MacPhee, the Director of Operations at Ontario Northland, a valued Betterez customer.

In a bid to tackle the issue of homelessness in Toronto, the project sees decommissioned coach buses repurposed to provide people living on the street in the city with a safe place to sleep for the night.

Naeem first came up with the idea after having a conversation about the scrap value of buses as many are discarded before the end of their valuable life. At the same time, homelessness was increasingly visible in the streets of Toronto, and he felt that there was more to be done about it. This is when the Shelter Bus concept came to him.

After consulting with work colleagues to see if his enthusiasm was shared, he took the idea to Dr. Aslam Daud, the chairman of Humanity First Canada who agreed to work with him on the project.

As homelessness is becoming more prevalent in Toronto as well as Canada as a whole, shelters that provide care for those living on the street have been under increased strain. This is compounded by the harsh Canadian winters, and 2017 saw Toronto Public Health report the deaths of one hundred people struggling with homelessness.

With this in mind, the idea behind the Humanity First Shelter Bus project is to provide some respite to people on the street and help alleviate pressure on the shelters which are often already at capacity. People staying on the bus will have access to a safe place to sleep, a comfortable bed, wash facilities, and a meal.

How It Will Work

A driver and two volunteers will work overnight shifts of 12 hours. After identifying an area in need, the bus will be driven to a pre-approved designated spot within the vicinity. Before coming onboard, the homeless will be screened.

Once inside, volunteers will engage with them and give out a care package. The idea here is to get more involved so as to better understand the needs of the community.

In the morning, people will be helped off the bus, after which it will return to a depot for cleaning and maintenance.

Benefits Of A Mobile Shelter

The benefits of repurposing the coach bus to become a shelter lay largely around the fact that it is mobile. Mobility means it can respond to shifting demand in the Greater Toronto Area (GTA) for the overnight service, as well as get to remote areas to access people who have been temporarily displaced.

Currently, there is one Shelter Bus that has undergone conversion. The plan is to extend this fleet through fundraising – a single conversion costs in the region of $100,000!

The bus is a Quebec manufactured Prevost coach. It is currently on its third life and went through a process of mechanical and physical upgrades to become what it is today. Features of the bus include:

The Team Managing The Project

At ground level, a highly qualified volunteer team assembled by Naeem, bring various operational skills to the mix and directly oversee the day-to-day running of the project.

Additionally, an expanding advisory board filled with industry experts who are professionals in their field provides the project with the backbone of expertise required to run a program of this nature. We congratulate Tracy MacPhee at Ontario Northland, on becoming the newest board member! 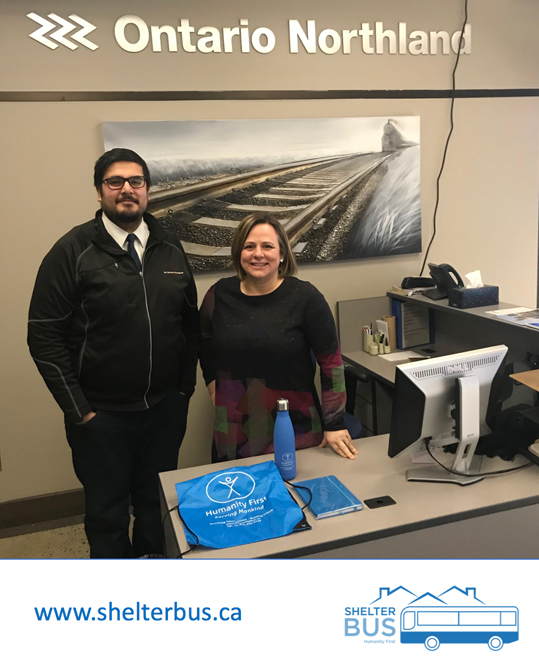 Image from Shelter Bus on LinkedIn

What The Future Holds

Fundraising is underway, but donors are needed to secure funds required to perform the next conversion. The plan is to build a fleet of coaches and transit buses to serve those in need in the Greater Toronto Area, and eventually across Canada.

How You Can Help

Donations can be made through the Humanity First or Shelter Bus websites. Through these avenues, money raised will go towards buying meals, homeless care packages, and funding the project as a whole. Furthermore, the organizers are always on the lookout for volunteers who can help with the day to day operations of the project.

Want to hear from us more regularly? Sign up for our newsletter today.